Jules Kounde wasn’t in Sevilla’s squad on Saturday evening as the club drew 1-1 with Elche. According to multiple reports from Spain he’d asked not to be involved, given his current situation.

Chelsea have been heavily linked with the Frenchman, but are yet to submit an offer high enough to please Sevilla. Given Saturday evening saw the completion of Kurt Zouma’s move to West Ham, it would make sense for the Blues to now going fully in for Kounde.

Sunday’s edition of ABC Sevilla says the La Liga club expect Chelsea to return with a fresh effort ‘in the next few hours’. There’s still confidence at Sevilla that they have the ‘upper hand’, given the defender has a contract lasting until 2024 and a €90m release clause.

Should they not sell the player this month, it’s expected he’ll settle down and wait for a move next summer, and the similar situation of Dani Alves and Chelsea, all the way back in 2007, is once again referenced. 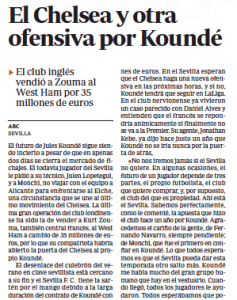 Alves didn’t get his move to the London club, and then went to Barcelona a year later.

Now it’s down to Thomas Tuchel’s side to make sure things work out differently this time.