Home Europe “It all took too long” – Player’s father speaks about ‘uncertainty’ which...
SHARE

Long linked with a move to Milan, Nikola Vlasic ended up signing for West Ham United towards the end of the transfer window.

Already aware of the Premier League’s toughness from his previous spell at Everton, the Croatian playmaker decided it was time to give it another go, jumping at the opportunity when the Hammers came calling.

He’s likely delighted, as is his father, Josko Vlasic, who has now seen his son return to England and his daughter, Blanka, be admitted to the Athletics Rally Hall of Fame on Wednesday.

Signed from CSKA, the attacking midfielder’s transfer was a relief for the parent, who told Vecerjni List about his feelings following the move’s completion.

He said: “It all took too long, that uncertainty. Nikola stayed in Moscow for too long and it was time for a new step. CSKA is a great club, not only in Russia. After all, the first season when Nikola came, they beat Real Madrid twice in the Champions League, in Madrid and in Moscow.

“We all knew that the time of parting would come, it just took a little longer. I am happy that he’s going to England, to one of the strongest European leagues”.

As for the move to Milan, Josko Vlasic confirmed that was a distinct possibility prior to West Ham turning up.

He said: “He should have (gone to Milan). Milan wanted him badly, but the clubs failed to agree on compensation”. 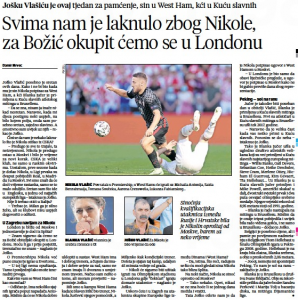 With Vlasic potentially featuring after the international break, his father is keen to see him in David Moyes’ team, which he rates highly.

He added: “It’s a great team, with some great players like the striker Antonio. I think Nikola will fit in well with the system. West Ham also have a good manager, and I hear they also have good working conditions. I just don’t know if they have a gym with artificial turf. I heard something about it but I have to check”.

Vlasic is now with the Croatia national team, and the transfer was put together to ensure he didn’t miss too much of the international break sorting things out.

His father stated: “He was in London only to perform medical examinations, and he signed a contract in Moscow so as not to lose too many days with the national team”.