Barcelona have made a final offer to Ousmane Dembele for him to renew his deal, but could be scuppered by Chelsea, who can offer more.

That’s according to journalist Jose Alvarez, who covers the latest developments in the saga around the Frenchman.

Dembele is out of contract at the Camp Nou in the summer and despite Barcelona’s best efforts to get him to sign a new deal, he’s not yet done so.

He’s subsequently been linked with clubs all over Europe, particularly Newcastle, who are said to have made him a huge offer in an attempt to convince him to move to St James Park.

That’s been ignored for the time being, with Barcelona continuing their efforts to convince him to sign a new deal and his agent exploring every option available while they do so.

One of the latest to be linked with a move are Chelsea, and according to Alvarez, they could offer more than what Barcelona are willing to go to.

“Barcelona are finalising their final offer to Dembele after contact with his agent Moussa Sissoko,” he told El Chiringuito.

“It’s €8m fixed for the season, less that what he earns now. It’s also less than the big offer from Newcastle, which was €15m a year net.

“There is also the interest from Chelsea, who could offer more to his entourage. Barcelona’s last offer will be €8m net with variables.” 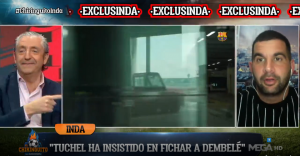 Now this is part of a conversation with several other journalists regarding Dembele and his situation at the Camp Nou.

One of these earlier claimed that ‘Thomas Tuchas has insisted on the signing of Dembele‘ for Chelsea.

This is splashed across El Chiringuito’s coverage, including all over the screen while they cut to Alvarez giving his information on what’s going on behind the scenes.