Before his surprisingly expensive transfer from Anderlecht to Stade Rennais in the summer, Jérémy Doku was a target for Liverpool in the Premier League.

The young winger had even travelled to their training ground to have a look around, meeting the likes of Steven Gerrard, Jürgen Klopp and Sadio Mané, whom he had a longer chat with, along the way.

It was well publicised, and the player has spoken about it a number of times, doing so once more in an interview with Ouest-France on Monday.

Explaining that the Reds came knocking just before his 16th birthday, when he was able to sign a professional contract, Doku also revealed the likes of Chelsea and Arsenal also came to have a look at him.

While Liverpool were the ‘most concrete’, according to him, he still decided to commit to Anderlecht instead, preferring stability at an early age instead of making the big leap early to the Premier League. 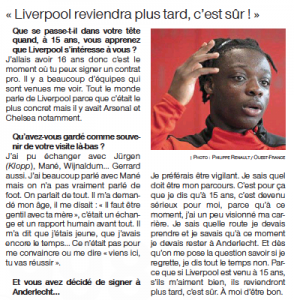 He explained: “I preferred to be careful. I know what my trajectory has to be. That’s why, at 15, I told myself it had become serious, because I’d seen my career. I know what route I needed to take and I knew at that moment I needed to stay at Anderlecht.

“As soon as I’m asked if I regret it, I always say no, because if Liverpool came to me at 15, if they like me, they’ll come back later, that’s certain. It’s up to me to be good”.