Friday’s edition of Sport claims Barcelona could see more players leave the club in January than they had anticipated.

There is a possibility of Malcom’s exit as they mention that Ernesto Valverde never endorsed his signing and it was the sporting leaders who decided to bring the Brazilian to the club from Bordeaux last summer.

Having made only one start in the league and four more substitute appearances, the winger is now drawing attention from Tottenham Hotspur and they have already requested the 21-year-old from the Blaugrana.

Due to lack of playing time, the Catalan club has given freedom to the player to decide his future and having invested €40m in his signing, the La Liga winners are confident of recovering the money.

The north London club entered the scene for Malcom at the right time.

Sport mentions there have been telephone calls between the two clubs and Barcelona are now waiting for an official offer from Tottenham to make a decision about the player. 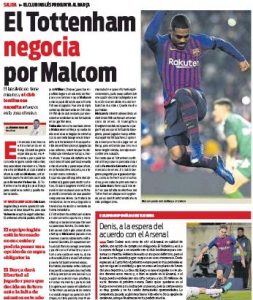 It’s not a priority for Barca to see Malcom leave this month, but the report mentions that they would study any offer they receive for him.

Chinese club Guangzhou Evergrande are ready to pay the fee to secure Malcom’s services, but he’s unwilling to make a switch to the Far East and this could come as a good news for the Premier League outfit.