With Gonzalo Higuain being on the verge of a move to Chelsea, with some claims from Italy that the deal could even be finalised on Friday, AC Milan need a replacement for the man they’ve had on loan from Juventus.

The Italian media believe that man is Krzysztof Piatek and his proposed move from Genoa is arguably the biggest transfer story for Serie A right now.

Piatek has seen his star shoot off into space this season, thanks to his impressive goalscoring. Finding the back of the net 19 times so far this season, across Serie A and the Coppa Italia, the Polish striker is much wanted.

West Ham offers, up to around €40m, have been reported in the Italian media this week, but the player looks set to snub the chance to sign for the Hammers. 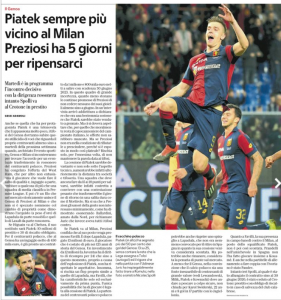 Friday’s edition of La Repubblica acknowledges West Ham’s serious interest, then says the 23 year old ‘aspires to something more’ than playing for the English club and being part of a mid table team.

Therefore, Genoa have ‘frozen’ the offer from West Ham.