Bafetimbi Gomis has done much better at Marseille than many expected. Signing on loan from Swansea City, it wouldn’t be too unfair to say the former Lyon striker wasn’t a cause of huge excitement in Marseille.

With the club undergoing an ownership change, now fully done, Gomis was seen as a stopgap, someone the club would just have to make do with until the money started flowing.

However, the goals started flowing and Gomis has done so well that he’s pretty much made Marseille duty bound to try and sign him from Swansea permanently. The 31 year old has scored 16 goals already this season, and he’s been out injured since February.

In his four games before the lay-off, Gomis scored 6 goals and the club are hoping he’ll be back on the pitch soon. Marseille still want to sign a ‘star striker’ in the summer, and Gomis would be his sidekick. 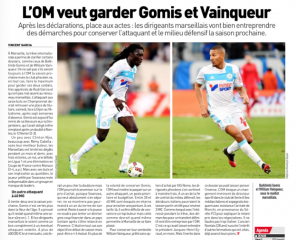 The player’s wages are a worry for Marseille, but French newspaper L’Equipe believe the club can balance that against a low transfer fee.

It’s stated that Swansea City ‘absolutely’ want to sell the player and aren’t going to haggle too much on price, given Gomis turns 32 years of age in August and only has a year of contract left.

If the fee offered by Marseille is too low it’s worth Swansea checking out other possible buyers, even in France’s Ligue 1. Paul Clement may even consider bringing Gomis back to Wales and keeping him in the Swansea squad.