Ron-Robert Zieler is firmly second choice to Kasper Schmeichel at Leicester City and in a long interview with Kicker, the German magazine tried every way they knew to get some hints about a transfer out of the goalkeeper.

Zieler wasn’t up for providing transfer rumours and batted each question back superbly. When asked if he’s frustrated by Schmeichel getting the games, Zieler said: “Why? Anyone who knows me knows that I recognise his performance fairly and honestly.”

Further rebuttals like “No, and it is not the right time to think more about the future,” and “As I said: Now is not the time to speculate about such things,” cleared up the situation perfectly for Kicker.

Zieler would like to play more, but certainly isn’t going to rock the boat at Leicester City.

Unsurprisingly the 28 year old was also asked about Claudio Ranieri’s exit and the impact of Craig Shakespeare, but Zieler doesn’t believe much has changed on the coaching and 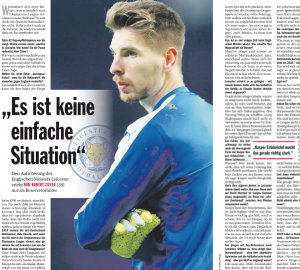 management side, with it being the players proving the difference.

“There were certainly some reasons why it didn’t work overall. It would be totally wrong, only to blame him (Ranieri). Everyone here has given their all to create the turning point. Craig Shakespeare doesn’t make that much difference, he was co-coach.”

With rumours circulating about Schmeichel potentially leaving Leicester at the end of the season, Zieler may well be waiting until then to see if things change. If not, the German goalkeeper could fancy a change of scenery.