On Wednesday we covered a report from the Italian press which detailed how hard it’s going to be for any club to sign Romelu Lukaku in the summer from Everton. The Merseyside club’s new found financial strength has been added to a tough stance on transfers which has been around for some time.

Everton will do all they can to keep Lukaku, and if he must go then it’ll be a huge deal, potentially record breaking. Italy’s Tuttosport believed clubs would be looking at over €75m to get the Belgian international.

That sounded about right, but the memo hasn’t got to Atletico Madrid, if Spanish newspaper AS are to be believed. It’s claimed Atletico are keen on Lyon’s Alexandre 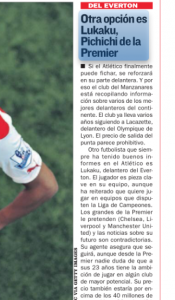 Lacazette, but his price ‘seems prohibitive’.

If Lacazette’s price ‘seems prohibitive’, Atletico would surely swerve Lukaku too, because he’s likely to be more expensive. But AS say Atletico believe they’d be looking at a starting of €40m and upwards for the Everton star.

They’d be better with a starting point of twice that figure, and then coming down slowly.