SporunDibi.Com have claimed Sivasspor are looking to sign Derby County striker Darren Bent ahead of next season.

Sivasspor are currently in discussions with the Derby striker and his move could be confirmed soon, according to the Turkish claims. It’s now likely Sivasspor will invite Bent to Turkey for further talks if they can reach an agreement in principle with Derby Country.

The Turkish side have aims to get qualification to the Europa League next season, and have already been busy in this transfer window. Sivasspor have already confirmed the signing of former Everton striker Arouna Kone after his contract expired with the Premier League club last month. 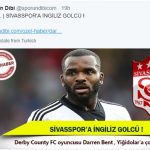 Bent could be offered a good salary by Sivasspor and top flight football for next season, his current deal with Derby County expires in 2018.

The 33 year old forward scored 13 goals for Derby last season in all competitions, but given his age the Championship side could be tempted to let him leave this summer.