According to claims in the Italian media, Leeds United are closing in on Chievo Verona forward Caleb Ekuban. The 23-year-old has been linked with a move to the Championship side in recent weeks.

TMW have reported Ekuban could leave Verona this summer despite an impressive season whilst on loan with Partizani Tirana during the last campaign.

The player has since returned to Italy following his spell in Albania, but his future with the Serie A club is uncertain. It’s been reported the young attacker could now fly to England to sign for Leeds United ahead of next season. 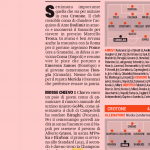 However, reports Ekuban’s move to Leeds United is imminent could be premature, as it comes just days after Gazzetta dello Sport claimed the forward looks set to leave Chiveo.

The Italian newspaper reported Leeds United are in the hunt for the player, but there was no indication about any talks or offers from the English club.

Thomas Christiansen’s previous club APOEL have also been linked with the player.