Wahbi Khazri is currently doing really well in Ligue 1, which is no surprise considering he did the same last season.

Spending the campaign on loan at Rennes from Sunderland, the club wanted a permanent deal but couldn’t agree the financial terms with either player or club. They weren’t the only ones interested, several other French clubs were linked but there didn’t appear an early summer urgency to get a deal done.

Eventually, Khazri signed for Saint Etienne for a headline fee of €10m which included bonuses. But L’Equipe today report it was actually €6m paid to Sunderland, and they don’t mention any bonuses.

The French newspaper call that a ‘good deal’, which it certainly is, and the transfer is celebrated after Khazri scored another goal, this time against Rennes.

Scoring four goals in his past four games, the 27 year old has been Man of the Match on two of those occasions, and that was the case again in Sunday’s 1-1 draw. 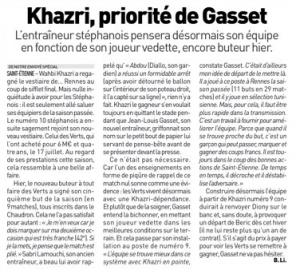 Given how he played last season, that Saint Etienne managed to pay €6m to Sunderland, even if there’s bonuses which L’Equipe don’t mention, represents great business for them and not so great for the English club.