Early November saw talk of a imminent Sunderland takeover, with 22-year-old Kyril Louis-Dreyfus one of the men behind it.

His mother Magarita and his late father Robert had previously been into the football business with ownership of Marseille, and that’s when Kyril got a taste for the commercial side of the game.

Monday evening’s edition of France Football takes a look at the situation, and they say the interest remains ‘more than serious’. Kyril has been considering the Sunderland takeover along with Uruguayan Juan Sartori, who just happens to be the son-in-law of Dmitry Rybolovlev, who owns AS Monaco.

According to France Football, a Sunderland takeover would be just one part of a more ambitious wider project, which would see the business group building a portfolio of clubs in England (Sunderland), Uruguay and France. 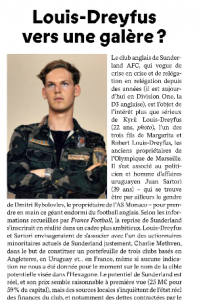 There’s then some pessimism attached to the potential deal, with it stated there are serious concerns about Sunderland’s true finances. France Football ask if Louis-Dreyfus is ‘really aware of the gravity of the economic situation’.

They doubt it, and state it’s a ‘surprise’ that the potential investors have ‘apparently’ not yet performed full due diligence on a Sunderland takeover.

When they do so, it’s believed ‘surprises’ will be found.

Player set for ‘first part of medical’ to join Liverpool –...

Club ‘in talks’ with Manchester United over late OT exit –...