France Football report they’ve learned, via their own sources, that West Ham have an interest in Lyon’s Moussa Dembele.

Dembele has made 11 appearances for Lyon in Ligue 1 so far this season, yet has only picked up around 500 minutes across those. Unfortunately, he hasn’t managed a single goal or assist across that time.

That’s a big drop from last season, when he found the back of the net 24 times and added seven assists. With a contract lasting until June 2023, Lyon will face a decision soon over whether to offer a renewal or look for a transfer before Dembele’s value starts to drop. 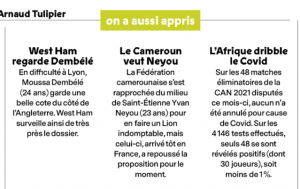 West Ham are in the picture, and France Football state the London club are watching the situation ‘very closely’.

Given Dembele has gone from being linked with clubs like Manchester United and Chelsea to West Ham, it shows his career is in danger of stagnating.