Giovani Lo Celso to Tottenham is a move that you’ve likely heard of by this point in the transfer window.

Tottenham are keen on the Argentine midfielder, with Mauricio Pochettino having made his signing something of a priority.

However, a deal is yet to be done, with Spurs yet to match Real Betis’ asking price for the player and negotiations at something of an impasse because of that.

The La Liga club recently completed the signing of Nabil Fekir, though, and the Frenchman’s arrival seems to be speeding up the departure of Lo Celso, or at least the need for the club to sort out the transfer.

ABC Sevilla report that the move ‘has to be finalised’ after the arrival of Fekir while reiterating the previous reports that Lo Celso has made it clear he wants to leave. 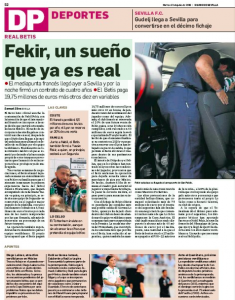 They add that Betis are demanding as big a fee as possible, with Estadio Deportivo backing that up and saying they won’t ‘lower their level’, aka asking price, for the midfielder.

Diario de Sevilla have the biggest information on the ongoing deal, though, and say that Lo Celso wants the move to Tottenham after speaking with Pochettino on the phone.

Spurs match his ambitions and have offered him a ‘succulent’ deal that will see him triple his wages. Negotiations with Betis started before the Copa America this summer, however, the asking price is holding things up.

They want €75m because €22m is going to PSG and 20% to Lo Celso and former club Rosario, but Spurs have ‘never been willing’ to pay more than €60m for him. Betis are therefore waiting for Tottenham to up their bid, otherwise, they will keep rejecting their advances.