Tottenham Hotspur were linked with several strikers during the winter market, with Krzysztof Piatek being one of the players to have the most reports about a potential move to Spurs.

Having fallen out of favour at AC Milan, the Poland international’s situation got worse when Zlatan Ibrahimovic was signed during January. With it looking unlikely that Piatek could play alongside him, or that he’d be chosen ahead of the former Manchester United player, an exit became urgent.

Harry Kane’s injury motivated Jose Mourinho into action, and it was reported repeatedly in Italy that Tottenham had made an 18 month loan offer for Piatek.

AC Milan were looking for a permanent deal, and the player ended up moving that way to Hertha Berlin. 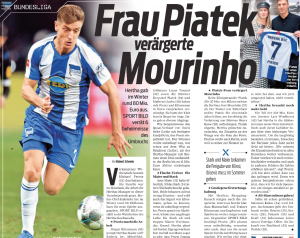 This week’s edition of SportBild presents another reason for the snub to Mourinho’s team.

They state Piatek’s wife turned the decision in Hertha’s favour, because she wanted to be closer to home, which Berlin is compared to London.

Despite these SportBild claims, the real balance of power likely rests with the offers made to AC Milan.