Bayern Munich have long been interested in the winger and the Germany international isn’t mentioned on LIAN Sports’ website so far.

SportBild now claims the 24-year-old has a fixed notice period of three months and that period will be completed at the end of March. Therefore, the new agency will only be able to negotiate on the player’s behalf from April 1st.

This also means no matter what happens behind the scenes, the Bundesliga winners will not be able to negotiate a deal for Pep Guardiola’s wideman before April.

That’s because Sané’s new representative will not even be able to negotiate with the Premier League winners until the end of the notice period with Beckham’s agency.

In addition to this, Sané has signalled his intention to work under new coach Hansi Flick and believes a move to the Allianz Arena will improve his chances of winning the Champions League. 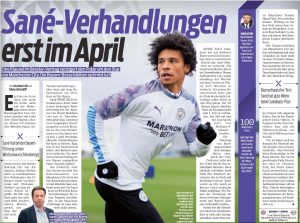 As SportBild have it, Manchester City have accepted Sané will not sign a new contract and therefore, Guardiola suggested a swap deal involving Sané and Kinglsey Coman. However, this possibility has been dismissed by Bayern.

Bayern will now have to negotiate a new deal with Sané’s new representative to get the deal over the line.