Paris Saint-Germain striker Mauro Icardi has ‘had contacts’ with Wolverhampton Wanderers about a potential move this summer.

That’s according to Corriere Dello Sport, who say the potential move is being handled by Jorge Mendes.

Icardi is on the list of players that PSG would like to move on this summer, with them keen to reshape the squad for new manager Christophe Galtier.

He’s been linked with clubs around Europe, but the last, and most surprising name, was that of Wolves.

Earlier this month, we covered how they had been pulled into the picture by Mendes, who PSG have reportedly asked to help find a suitor for the Argentine striker.

That was followed by a claim the Portuguese super-agent, who has a special relationship with those in charge at Molineux, was working on a potential move for Icardi. 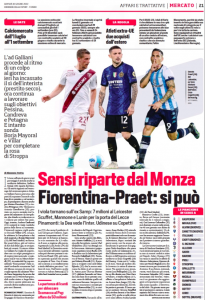 Corriere now follow that up, stating that the striker has had ‘contacts’ with Wolves, who are ‘very close’ to Mendes.

He has been handling several transfer issues with the French giants, and Icardi is one of them he’s involved with.

Now, that does not mean Wolves are the favourites for him, or he will end up in Bruno Lage’s squad this summer, but the possibility is certainly there.

It’ll likely depend on Mendes’ ability to convince the player or perhaps find other suitors, which at the moment do not appear to be forthcoming.