Home Europe Club ‘asking Mendes for support’ to see if he can put shock...
SHARE

We hear you, Wolverhampton Wanderers fans.

The summer transfer market hasn’t gone to plan so far, with even Portuguese players, normally your yearly bread and butter, struggling to find their way to Molineux.

While we would love to bring you some good news, we’re not entirely sure what we’re about to tell you counts as that, because it’s both completely out of the blue and not exactly overly enticing.

What we’re dealing with here is a story sending Mauro Icardi, currently living a cozy life at Paris Saint-Germain, to Wolves.

We’ll make it clear immediately that it comes from Italy as part of a brief column about the Ligue 1 champions trying to sign Gianluca Scamacca from Sassuolo. 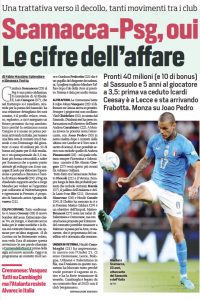 Corriere dello Sport then explain that ‘they key to unlocking the operation and bringing it to a close is the exit of Mauro Icardi’.

The newspaper then state ‘Paris Saint-Germain are asking Jorge Mendes for support to see if the Argentine can join Wolverhampton Wanderers and regenerate himself in the Premier League’.

That’s all they have to say on the matter, and it’s fair to say that it’s come as a bit of a shock (we had to double and triple check to make sure that’s what was written).

For now, we would take this with a pinch of salt, but if it does start to grow into anything bigger than this, we will ensure to let you know as soon as possible.