Home Championship Stegeman confirms Sheffield Wednesday transfer, as long as no ‘spanner in the...
SHARE

Joey Pelupessy will soon be a Sheffield Wednesday player as long as there’s no last minute problems on a deal, reports De Telegraaf.

The Dutch newspaper, in their Thursday edition, explain the only barrier between Pelupessy and Sheffield Wednesday is now the medical examinations.

If there’s no ‘spanner in the works’ thrown up by that, everything is fine for a deal to be completed.

Pelupessy’s current manager at Heracles, John Stegeman, has even been quoted on the impending move and confirmed he’s not thrilled but is taking some pride from the transfer: “Joey is an extension of me as a trainer and an important pillar, so this is a big loss. We are also proud that we have again delivered a player to a major competition.” 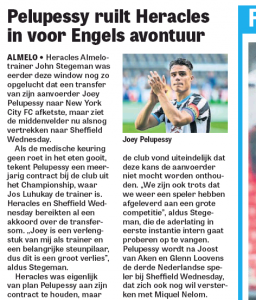 Heracles had been planning to keep Pelupessy, who is the Dutch club’s captain, but they’ve managed to agree a fee with Championship side Sheffield Wednesday, and don’t want to stand in the player’s way.

Sheffield Wednesday have been looking towards the Netherlands for recruitment this month, having appointed Jos Luhukay as manager.