Bruno Fernandes’ move to Manchester United proved to be the biggest thing that happened in the January transfer window.

As in the summer, the potential deal became something of a saga, with daily updates on price, contracts and everything else in between.

Ultimately Manchester United got their man, paying an initial €55m in a deal that could rise to €80m if bonuses are met.

Unlike most deals, there was very little secrecy in this one, with Sporting even sharing how the deal was broken up.

And now, we have further details on just how much Manchester United have paid for Fernandes courtesy of A Bola.

They report Sporting recently sent their accounts to the Comissão de Mercado de Valores Mobiliários (CMVM) and the details of Fernandes’ move were detailed within it.

And, it turns out, that while a deal was agreed for €55m, the Portuguese club only immediately received €34.13m. 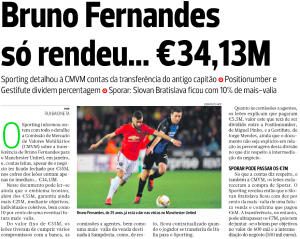 However, they are ‘guaranteed’ an additional €25m in bonuses based on both Fernandes’ and Manchester United’s performances, while they also have a 10% clause on any future sale.

The move proved to be a particularly big one for the agents involved, with Miguel Pinho and Gestifute, namely Jorge Mendes, earning themselves a princely $5.5m between them, although it isn’t explained how that is split.

Nonetheless, the cost for a player of Fernandes’ quality isn’t a bad deal at all for Manchester United, who will probably be pretty pleased with themselves on this occasion.