Southampton defender Wesley Hoedt says he will have to wait until the end of the season to see if his move to Antwerp becomes a permanent one.

Hoedt joined Southampton from Lazio in a £14m deal back in 2017 and made 32 appearances in all competitions for the club that season.

However, he found himself increasingly out of contention last year, making just 13 appearances in all competitions before heading out on loan to Celta Vigo in the second half of the campaign.

This year he has gone out on loan again, joining up with Royal Antwerp in the summer transfer window.

He’s turned into a key player for the Belgian side, making 23 appearances in all competitions and proving to be something of a hit.

They have an option to turn his loan deal into a permanent on for €8m, but Hoedt says it’s a case of waiting to see if they decide to take him from Southampton.

“If you compare it to the highest transfer fee Antwerp’s already paid, you’ll know whether that option is affordable or not,” he told Het Laatste Nieuws.

“But I’m happy here. I play, help the club. We’ll see the rest at the end of the season.” 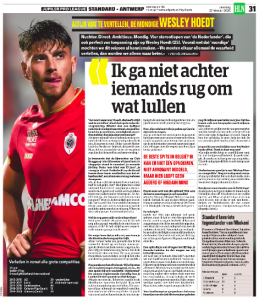 While Hoedt has become a first-team regular at Antwerp, and his time on the pitch has been a successful one, controversy has followed him.

For example, the defender has recently found himself facing criticism after comments made about a linesman and youngster Jérémy Doku.

He, though, insists he won’t be changing his stance anytime soon, preferring to be someone who tells the truth regardless of the impression it makes.

“I say what I think. Whether that’s typically Dutch or rather un-Belgian, I don’t know. But I am someone who prefers to tell the truth rather than fool myself and others.

“That’s who I am. Sometimes it’s appreciated, sometimes it’s not. I’d rather do that than go along with public opinion and say nothing.

“What you see is what you get. And that’s the way it’s supposed to be.”

Everton man has ‘convinced’ himself to join club – He ‘can’t wait’ for exit, belief loan deal is most viable option

Everton man has ‘convinced’ himself to join club – He ‘can’t...

Manchester United ‘ready’ to spend €90m on player – Have already...