Despite Leeds United telling their local media Aitor Karanka won’t be the club’s next manager, it hasn’t stopped the rumours that he may well be. Still one of the favourites in the ever changing betting, Karanka has been linked to Spanish club Alaves in recent days.

It was AS who pushed the Alaves claims and in their Sunday edition the Spanish newspaper still say Leeds United are trying to tempt Karanka to take over at Elland Road. The former Middlesbrough manager isn’t the favourite for the Alaves job, and AS believe there has been, and still is from some clubs, interest in England.

Garry Monk’s former assistant Pep Clotet has seen a surge in the past 24 hours or so, and such an appointment could make it easier for Leeds to manager transfers from higher up the chain. 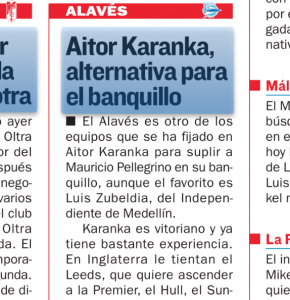 Karanka grew increasingly frustrated with transfers at Middlesbrough, and perhaps Victor Orta believes he’d have more power over recruitment if there was a less high profile manager in place at Leeds.

Of course, it’s a better Spanish story for English clubs to be trying to tempt Karanka and him turn them down, than the opposite.