Samuel Umtiti has returned to the Barcelona squad, having been released by France due to injury.

It will be especially disappointing for all involved, with the central defender looking to leave injury worries behind him after a long and difficult recovery from a knee problem. Thankfully, this time it doesn’t seem to be connected to anything long term, as Mundo Deportivo report he’s returned to recover from bruising to his right foot.

The Catalan newspaper calls this another example of the ‘FIFA virus’, when Barca send players away for international duty and then see them return less than fully fit.

Nelson Semedo is another worry, although the situation doesn’t seem as bad as it could have been. He was stretchered off whilst playing for Portugal against Serbia, and that inevitably sent alarm bells off at the Camp Nou. 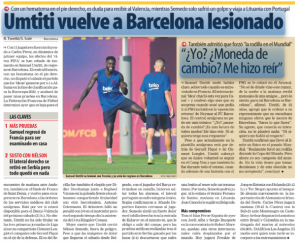 Mundo Deportivo say they’ve spoken to a source close to the player who explained Semedo ‘felt a strong pain in his right ankle’ after a tackle.

Fortunately further tests haven’t shown anything serious, although Barcelona will likely want Portugal to be cautious with their player.