Monday’s edition of Mundo Deportivo gives a negative stance on Manchester United’s efforts to get a new contract secured for David De Gea.

The Premier League club have been trying for over a year to get their goalkeeper to commit to a renewal, yet they haven’t made the breakthrough which would lead to a signed contract.

After Manchester United inevitably triggered the extra season in the player’s contract, he now has less than a year on the deal. With the contract expiring in June 2020, De Gea will be able to speak to other clubs from January onwards about a free transfer next summer.

Mundo Deportivo say the situation has ‘hardly moved in recent months’, with the 28 year old Spaniard not too bothered about pressure being put on him by the English club. 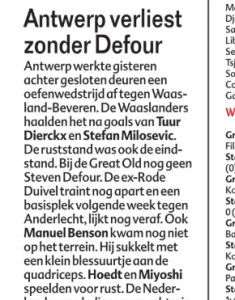 It could all be a case of pressuring Manchester United into offering more money than they’ve wanted to so far.

Alternatively, David de Gea may feel his time at Old Trafford is coming to an end, and be holding the club off to tempt others to make a move.

‘Sometimes too individualistic’ – Man City forward criticised, ‘far from answering to the expectations placed upon him’

Wolves’ Raul Jimenez says he’s ‘open to everything’ regarding future –...