Home Championship From Spain: Ander Iturraspe could be moving to Leeds United on a...
SHARE

Monday’s Basque edition of AS has an article which will very much be of interest to Leeds United supporters.

The Spanish newspaper claims that Ander Iturraspe could be on his way to Leeds United in the summer transfer window. With an Athletic Club Bilbao contract ending in June, the 30 year old is now free to start negotiations with others.

A midfielder, AS talk up Iturraspe’s natural talent but say he’s not a key figure in the big renovation plans the Bilbao club have, so would be looking to leave on a free transfer in June.

Leeds United could be his new destination, according to the report, and even more so should they secure promotion to the Premier League.

An adventure abroad is seen as a way for the footballer to kickstart his career, with Leeds the named option. 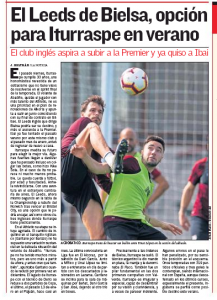 Current Leeds United manager Marcelo Bielsa worked with Iturraspe at Athletic, and showed confidence in the player at a key time in his career.

The footballer has only made four appearances this season due to selection choices and injury issues.