Home Europe Newcastle United player finds himself in European Team of the Week after...
SHARE

Each Monday, grand old Italian newspaper Gazzetta dello Sport pick out a selection of the best performers from around Europe, whilst ignoring their own Serie A.

This week Manchester City have a man named in the selection, with Raheem Sterling expectedly making the cut following his hat-trick against Watford.

One of Pep Guardiola’s team often finds themselves in the team, but the same can’t be said for Rafael Benitez’s men. However, this week Ayoze Perez has made his way in after a great performance against Everton.

Marco Silva’s men were leading Newcastle United 2-0, but they collapsed under the pressure of Newcastle, with former Sunderland goalkeeper Jordan Pickford seemingly distracted by a personal battle with the home fans. 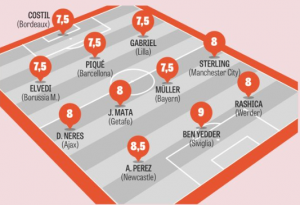 Perez scored twice and also provided an assist for Salomon Rondon, as Newcastle ending up winning 3-2.

Sevilla’s Wissan Ben Yedder is the top rated player of the week, with the Sevilla striker scoring a hat-trick against Real Sociedad.