Part of the midfield duo that oversaw a very impressive 3-1 win over Paris Saint-Germain on Sunday for OGC Nice, Jean Michaël Seri is attracting more and more admirers as the transfer window approaches.

The 25-year-old, who has already been regularly linked with a move to Southampton, which would lead to a reunion with his former manager Claude Puel, is currently in contract renewal talks with the Ligue 1 side. 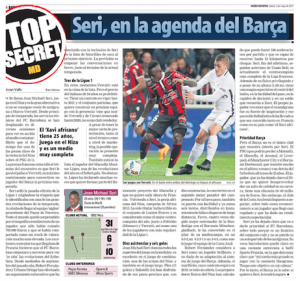 However, despite the reported interest from clubs abroad, including the Saints, the message filtering through is that he wants to continue with his current club.

But, and it’s a big one, that could change if the right club come along, a club the player himself has described as his dream destination: FC Barcelona.

According to Mundo Deportivo in Spain, the La Liga champions have targeted the Ivory Coast international as an alternative for Marco Verratti, even calling him, in a bid to make it sound far more exciting to their readers, the ‘African Xavi’.

Of course, Seri is yet to reach the Spanish midfielder’s heights, but he could certainly compliment Barcelona’s midfield with his energy and eye for a pass.

Were he to be presented with the option to either stay in Nice, team up with Claude Puel at St Mary’s, or move to Catalonia, he would pick the latter.

That’s why Mundo Deportivo finish their article with: “If they want Seri, they’ll definitely get him”.

The Catalan newspaper isn’t always the most accurate, but with Borussia Dortmund and Everton also reported to be interested over the past few weeks, Southampton’s chances of convincing Seri to join them certainly haven’t increased with this news.