Southampton continue to be pretty interested in the Portuguese league, and have reportedly scouted another game last night.

As reported by A Bola, emissaries from the Premier League side have attended the match between Moreirense and Belenenses, which ended with a 1-1 draw.

As usual, the newspaper doesn’t seem to know which players Southampton watched, and for the amount of games the club have been scouting, we can only guess they’re not looking for a specific player.

There weren’t many players who really stood out in the match, which was pretty even.

Belenenses’ attackers Keita and Fredy have done a successful job creating danger to Moreirense’s defence, while for the home side, right-back João Aurelio deserves some credit for finding a late equaliser five minutes into stoppage time. 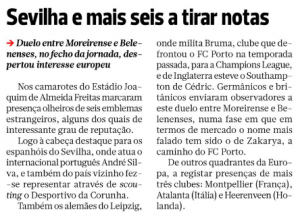 Sevilla, Deportivo La Coruña, RB Leipzig, Montpellier, Atalanta and Heerenveen were other clubs who had scouts at this match.