Chilean newspaper El Mercurio has explained the reason Claudio Bravo has been left out of the Chilean national team for the Copa America.

According to their sport section front page story, the Manchester City goalkeeper has been vetoed by his own teammates from La Roja.

It’s claimed that during Reinaldo Rueda’s tour in Europe, he’s spoken to several players who could be called up. He first went to England, where he spoke to Bravo, then to Italy, Germany and Turkey.

“Reinaldo Rueda spoke with Gary Medel, Mauricio Isla, Charles Aránguiz and Erick Pulgar … They all said the same thing: they didn’t want Bravo in the national team,” a source told El Mercurio, claiming that Pablo Hernandez was another of those players.

It’s said that only one player didn’t have an opinion on the matter, neither good or bad. That was Manchester United’s Alexis Sanchez. 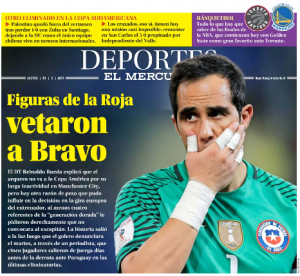 Rueda also spoke to Vidal, but Bravo wasn’t even mentioned in the conversation, since the manager’s mind was already made up and the Barcelona player would never say something positive about the goalkeeper.

Since Alexis Sanchez was the only who didn’t go against Bravo, El Mercurio wonders if this is the reason why the Manchester City player, along with Marcelo Diaz, was the only who went to the premiere of the film ‘Mi Amigo Alexis’ in Santiago.

But sources told El Mercurio the reason the rest of the invited players didn’t attend was because none of them were in Chile that day. So perhaps the Manchester United isn’t as involved in the drama as Chile’s media would like.