Manchester City and Manchester United have, reportedly at least, been chasing Bruno Fernandes for a while and today’s edition of Portuguese newspaper A Bola has a front page report on the Sporting star.

It’s claimed the Red Devils are ahead for the midfielder, even though their local rivals have already made an offer for the 24-year-old.

Within the story, A Bola explain that in the past few days, there’s been interesting moves which now put the Portugal international closer to Old Trafford than the Etihad.

Pep Guardiola’s side were first to put forward a ‘concrete proposal’ of €55m and include one or two of their own players as a part of the deal.

The Lions are not convinced by the offer made by the Premier League winners, even though the two clubs recently agreed a partnership. 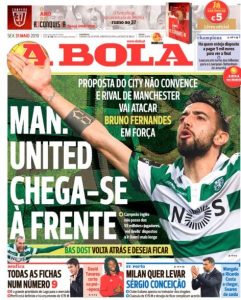 Sporting are clear that they will only sell their prized asset for a fee and do not want other players to be included in the deal.

Manchester United were the first club to express their interest in Fernandes and have been informed about the conditions for the transfer.

Though the 20-time English champions have not presented a formal offer, they are planning to prepare a ‘strong proposal’, and the numbers would convince the Portuguese side to sanction the former Sampdoria man’s sale.

Fernandes has a release clause of €100m, but Manchester United will not pay such a high fee for him. Their offer will be in excess of what City tabled (€55m) and it is expected to be in the region of €70-80m.

He is currently with the national team preparing for the upcoming international fixtures and A Bola claims United hope a deal can be secured soon, even within the next week. 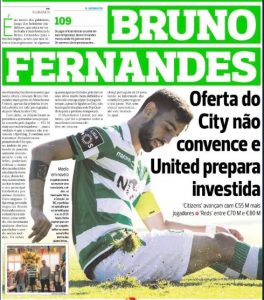 Should this happen, Fernandes will then be allowed to leave the Portugal camp and make a trip to Manchester to sign a contract.

The coming days could be crucial to find out if Manchester United will be able to land Fernandes or not.