Portuguese club Paços de Ferreira have taken legal action against Fulham and Nice over the transfer of Michael Seri.

Newspaper A Bola brings a story in which sources from the Primeira Liga club confirm that they have presented a complaint to FIFA about the case.

There’s the suspicion that Fulham and Nice weren’t straight about the player’s transfer fee.

The plan they would have used was to increase the price of Maxime Le Marchand, who was also sold from Nice to Fulham in the last summer.

So even though Nice got a fair amount for the duo, the theory is they announced separate deals to make Seri look cheaper. 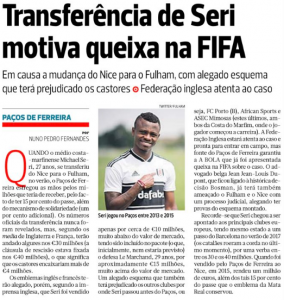 The clubs would have done that to decrease the profits that Paços de Ferreira and others would make with Seri’s transfer, since the Portuguese club had 10% of a future sale agreed when he moved to Nice in 2015.

Now Paços de Ferreira are after their money.

This has already been covered in France, from the perspective of Seri and his agents missing out, and it’s interesting that Paços sources now confirm they’re also taking action.