Manchester United’s latest trip to Spain ended in disappointment for them as they suffered a 2-1 defeat in the last group stage fixture of the Champions League.

The result didn’t dent their chances of making it to the next round, but a victory on Wednesday would have seen them top the group table after Juventus suffered a defeat at the hands of Young Boys.

Sergio Romero, Phil Jones and Andreas Pereira were given a rare start at the Mestalla, but the latter two failed to impress and the defender even scored an own goal following a mix up with his goalkeeper.

L’Equipe have slated summer signing Fred, Jones, Marouane Fellaini and Romelu Lukaku as, according to the French newspaper, they were the worst players on the pitch and all of them were given a rating of 3. Out of 10.

Despite missing an opportunity to score from close range, Paul Pogba was given a rating of 4, along with Juan Mata, Pereira, Antonio Valencia and the Argentine stopper.

According to L’Equipe, the two best players on the pitch amongst the 11 were Marcos Rojo and Eric Bailly, who were rated 5 and the team’s average rating is 3.8.

That Valencia were so much better than United and still only got an average rating of 5/10 is telling.

Catalan newspaper Sport rated second half substitute and goalscorer Marcus Rashford as best for the Red Devils, giving him a 7. They slated Jones, Valencia, Pogba and Lukaku, giving them the lowest rating of 4.

Marcos Rojo, Fred and Lukaku have got a blank from AS, unworthy of a grade, while the remaining players, apart from Mata and Rashford, got a single star.

Marca, like AS, have decided not to rate Rojo, Fred and Lukaku and also given a blank to Valencia. Rashford, along with Mata and Lingard got two stars while the rest were given one star, including Jose Mourinho.

Below, in order, are L’Eqiuipe, Marca, Sport and AS. 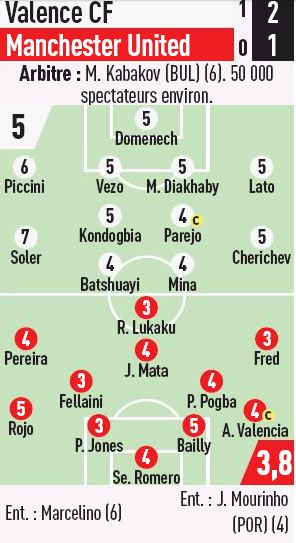 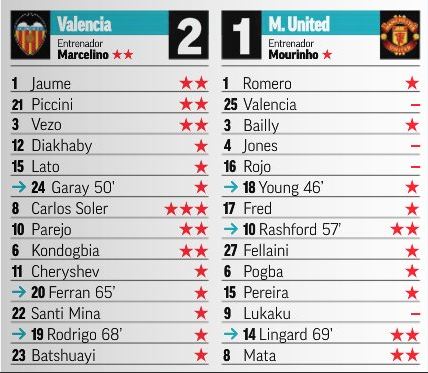 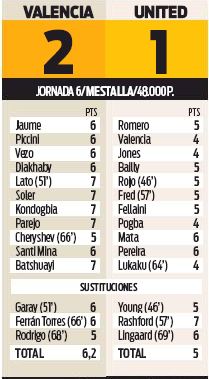 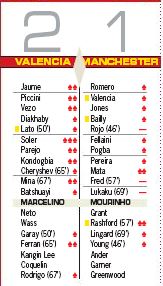