Home Premier League Liverpool “Somebody filmed us… I asked he not put it online” – Liverpool...
SHARE

In September, a video emerged of Liverpool star Sadio Mane helping to clean the toilets of his local mosque.

The video went viral, with Mane receiving lots of praise for being down to earth and not having the ‘starry’ persona which follows some Premier League footballers around.

Mane has been speaking to L’Equipe ahead of Liverpool’s match against PSG and was asked about all the attention it received.

The French newspaper wanted to know how it came about that Mane was filmed in such a situation and that it then ended up all over the internet.

“I am a Muslim, I pray five times a day and, as soon as I can, I do it at the mosque. Once I went there, and when there I found a very good friend, a Ghanaian. I invited him to drink some tea at home after the prayer and he said, ‘No, I have to work, I have to wash the mosque’s toilets.’

“I told him we were going to do it together. At the moment somebody filmed us and I asked he not put it online. He swore he wouldn’t do it and the next day it was on the internet. Well, it’s not very serious…”

L’Equipe wanted to know why Mane has this desire to help, why he puts himself forward to assist others.

Mane explained: “It’s something normal for me. I come from a small village (Bambali, south Senegal). My father was the imam of the village and he died when I was eleven, and I was raised by my mother, uncle and grandmother. In my youth, I went to work in fields where rice and peanuts are grown. And I continue to do it when I go back every summer… In the village, humility is an important value: we do not talk and we listen to the elders when they speak, it’s like that.”

Given all of this, L’Equipe find it strange that Mane has spoken about having admiration for someone more assertive like El-Hadji Diouf, but the Liverpool player explained: “Yes, I often spoke with him and he pushed me to assert myself. I listened to him and took the positive in what he told me. But I do not like being at the front of the stage. I believe that we must accept people as they are, with their qualities and their faults. I do not have a huge ego.” 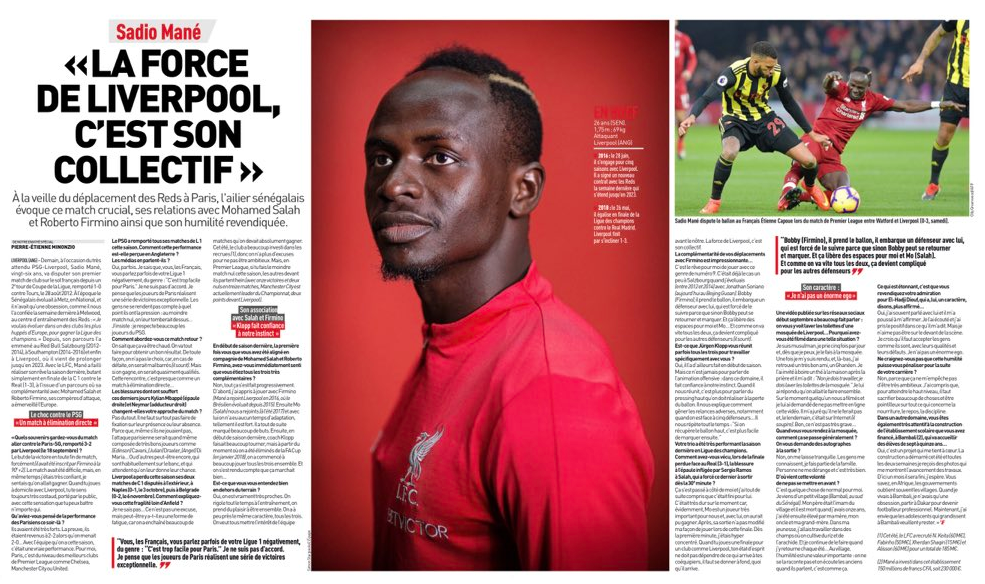 Mane doesn’t feel his humility will hold him back: “No, because that does not stop me from being very ambitious. I understood that to reach the high level, you have to sacrifice a lot of things and be picky about everything that concerns food, rest, discipline.”

To wrap the interview up, L’Equipe asked Mane about the construction of a school he’s funding in his home village: “It is a project that is close to my heart. The construction started this summer and every two weeks I receive pictures that show me the progress of the work. In a month it will be finished, I hope. You know, in Africa, governments often forget villages. When I lived in Bambali, I had only one obsession, to go to Dakar to become a professional footballer. Now, I want teenagers who grow up in Bambali to stay there.”