Within the modern manager community out there currently in the top leagues, many of them who play possession and pressing football will tell you that, in some shape or form, some of their ideas were inspired by Marcelo Bielsa.

The Argentine manager, currently at Leeds in the Championship, has inspired the likes of Pep Guardiola, yet none are as grateful for his tutelage as Tottenham’s Mauricio Pochettino.

Not only are they compatriots, but the Spurs head coach had the privilege of directly learning from Bielsa as a player, doing so at Newell’s in their home country.

Speaking to Gazzetta dello Sport for a long interview ahead of Tottenham’s clash against Inter in the Champions League, Pochettino was asked about the Leeds manager and what goes through his mind when his name is mentioned.

He said: “I was 13 when Bielsa and Jorge Griffa took me from a small town called Murphy and brought me to Newell’s. He gave me my debut. He’s like my second father. We were also together at Espanyol and in the national team. I owe him everything.” 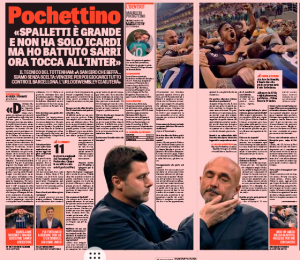 Not only did he play a major role in his career as a player, but Pochettino also revealed the Leeds manager gave him personal advice prior to his step into coaching.

“‘You have to always find your own path, through your emotions and how you feel’. Bielsa wins you over with what he does. and knows how to make you passionate. That’s the best thing he gave me.”

Passion is certainly something Bielsa has. Just ask Patrick Bamford. All you have to do is score a really nice goal in training, and the manager will jog 100 yards to give you a hug.