The Bruno Fernandes saga is getting to a point where we’re starting to believe the transfer will be done for much less than expected.

That’s backed up by a front page story from A Bola today. They say Manchester United and Tottenham Hotspur are refusing to pay the asking price for the midfielder, but still, the transfer could be done this week.

The front page headline says it’s the ‘last sprint for Bruno Fernandes’, ‘negotiations will accelerate in the next few days’, ‘there’s urgency from all parts for it to be done’.

Still, the very same front page, just like the story’s headline, says the Red Devils and Spurs are only going to €55m, while Sporting continue to demand €70m. 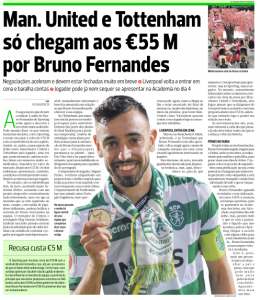 It’s claimed that Manchester United and Spurs are making similar offers, both to Sporting, as to the player.

However, the Old Trafford side are showing ‘more effective interest’, with Ole Gunnar Solskjaer putting on ‘enormous pressure’ for the board to get the deal done.

Manchester United’s offer is also said to be ‘sportingly more attractive’, since the summer departures give Bruno Fernandes a bigger chance of having a place in the team.

Meanwhile, Tottenham, who initially saw Fernandes as a replacement for Christian Eriksen, could sign the Portuguese player even if the Dane international stays. It’s claimed that Eric Dier, a former Sporting player, has been having an important role telling the Spurs’ board about Fernandes’ qualities.

It’s claimed that agent Miguel Pinho has been between England and Portugal trying to get the deal done. A Bola writes that the transfer could be concluded by the end of the week, or ‘in the worst scenario’, at the start of next week.