With every day that goes by, the stories sending Lucas Torreira to Milan are becoming more and more entertaining to read, as Milan work on new and creative ways to afford the Arsenal midfielder.

Gazzetta dello Sport list them all on Wednesday, and in each case, the Gunners would end up acquiring a useful player in exchange, even if he doesn’t necessarily directly replace the Uruguay international.

The first one is the most logical one, which would see Milan include Franck Kessie in their offer for Torreira, thus giving Unai Emery a like for like (or close enough) replacement, who is valued at around €25m.

The Serie A club would then pay the remaining money on top of the Ivorian, and everyone is happy.

Next on the list of alternative offers is to keep Kessie if Arsenal don’t want him and insert Ricardo Rodriguez instead.

Everyone is aware the Gunners are after a left-back, since they’re currently trying to sign Kieran Tierney from Celtic, but Milan would be prepared to save them that effort by offering money (paid either in full or instalments) + the Swiss international (valued at around €15m). 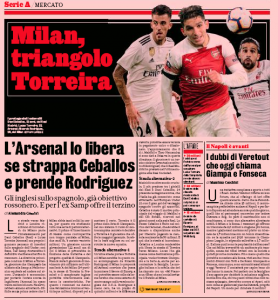 The Italians would then replace Rodriguez with Theo Hernandez, who has already met Paolo Maldini about a potential move from Madrid to Lombardy.

Finally, the third and final way of doing this is the more complicated one, as it involves Dani Ceballos.

Milan are reportedly interested in the Spaniard, who is looking for a way out of Real Madrid, but with Arsenal also keeping an eye on the midfielder, Gazzetta believe there’s a way of sorting things out amicably.

Since the Gunners have the money (or so the Italian newspaper think) to pay €50m, Milan won’t provide competition, therefore letting them have him.

In turn, having bolstered their midfield with the 22-year-old, they can allow Torreira to go to Milan without fretting too much about a replacement.

If you ask us, out of all of them, that last one sounds like the last thing Arsenal would do (especially the chucking €50m at Real Madrid for a player that already wants out).