Long linked with Everton, Southampton are the latest side to be mentioned alongside Lille’s Thiago Mendes.

According to local newspaper La Voix du Nord, who are normally clued in on all things related to the Ligue 1 side, both the Saints and an unnamed Serie A side are challenging Lyon for the Brazilian’s signature, valued at €25m.

Jean-Michel Aulas publicly admitted he was looking at Mendes should Tanguy Ndombele be sold, and the outlet state talks are already underway.

However, La Voix du Nord explain Southampton want to return into the league’s top half as soon as possible and could ‘quickly go on the offensive’ for the 27-year-old, seemingly intent on giving Ralph Hasenhuttl the tools to work his magic.

It will be interesting to see where Mendes’ priorities lie should the Saints make a move, as he would be guaranteed Champions League football at both Lyon and Lille. 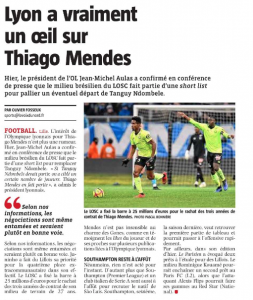 The Brazilian metronome was instrumental in Lille’s great season, helping them qualify for the Champions League by finishing second behind Paris Saint-Germain.

Specialising in keeping things ticking over in the centre of the pitch, Mendes produced four assists (he normally sits quite deep) in 34 appearances in Ligue 1 last year.