Throughout the last week, we’ve brought you various updates on the future of Southampton midfielder Mario Lemina.

He’s keen to leave Southampton this summer after it became clear he was not in Ralph Hassenhüttl’s plans for the campaign.

He was linked with several Premier League clubs, but those options never materialised, and instead, a return to France with Monaco became his best option.

The Ligue 1 side are keen to add a defensive midfielder to their squad, and while Tiemoué Bakayoko is their primary target, they’ve also considered Lemina as an option.

Both L’Equipe and RMC cover the potential move today and confirm Monaco are trying to sign Lemina from Southampton. 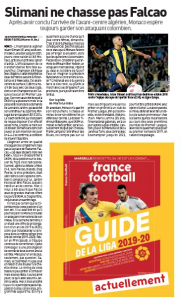 L’Equipe report Lemina is the ‘most credible track’ and he could join on an initial loan with an option to buy at the end of it.

RMC back that up and say Southampton and Monaco are
negotiating over the loan deal at this moment in time but add Lemina already has an agreement in place with Monaco and is keen to join them this summer.

It remains to be seen if the two clubs can find an agreement then.

Although with Southampton keen to get rid, Monaco in need of a midfielder and Lemina happy to join them, there are seemingly few obstacles in the way.