Genk won the Jupiler Pro League last season and Sander Berge was a regular member of the side during the title winning campaign.

The defensive midfielder’s performance caught the attention of clubs in the Premier League, as Sheffield United and Brighton & Hove Albion were believed to have shown interest in the 21-year-old.

Last month, Het Laatste Nieuws reported the Norway international turned down an opportunity to join the Blades as he was ‘aiming’ for a club that’s ‘higher’ than the Premier League new boys.

The same newspaper also reported on Tuesday that Sheffield were the only club to make a ‘concrete offer’ for him. Despite reports of interest from Chris Wilder’s side and the Seagulls, the player continued at Genk.

Het Belang van Limburg interviewed Berge and asked if he reportedly missed out an opportunity to join Sheffield. He responded by saying, “I have not talked to any clubs myself; I appeal to others for that. In any case, there was never a proposal which I thought was the right one for my future.”

“I don’t just want to change clubs for the sake of it. In life, you sometimes have to appreciate what you have in your hands at that moment. I’m at a top club, I’ve become a champion, I’ve enforced a leadership role. I have plenty of time to aim even higher.”

Despite several reports linking him with a move away from the Belgian club, Berge’s entourage made sure the player was only focused on football. 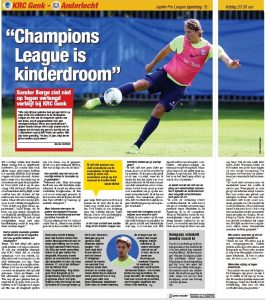 ” Not at all [hard to focus]. My entourage shielded me from all the messages, I had to deal with football. I have never been dismayed either…” he added.

Berge will be playing in the Champions League with Genk this season, something that wouldn’t have been the case if he had moved to Bramall Lane.

Chelsea open talks for midfielder’s departure – Blues being tough in...