Home Europe Side yet to match €15m asking price for Rangers star – In...
SHARE

Porto require a ‘game of patience’ if they are to sign Alfredo Morelos from Rangers this summer.

That’s according to A Bola, who provide an update on the Portuguese side’s pursuit of the Colombian forward.

Porto have reportedly been pressing to sign Morelos for several weeks but are yet to finalise a deal with Rangers, who are not keen to see him go.

They are demanding €15m for their man and are not willing to move from that standpoint as it was the price Lille offered them a year ago.

The market has changed since that point, though, particularly as a result of the pandemic, and the only side that have really come forward since then was Cagliari, who offered €8m.

Porto ‘remain attentive’ to the situation and are aware of Morelos’ ‘willingness’ to leave Rangers and join a club that plays in the Champions League regularly. 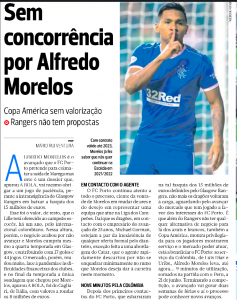 They are in contact with Morelos’ agent Michael Gorman and are aware there is no ‘formal offer’ for him at this moment in time.

It is then on Porto to find an agreement with Rangers, but they are yet to hit the €15m asking price after the first contact between both clubs.

The Portuguese side are willing to wait, though, and there could be movement on the move for Morelos when he returns from a two-week vacation at the end of the Copa America.