The Mexican media is back linking America striker Roger Martínez to Premier League side Sheffield United this Monday.

A couple of websites seem to be just running the same stories from the start of the month, but still, newspaper El Universal looks to be sure of what they are saying.

The outlet reports that America could lose the player, since there are clubs trying to take him to Europe this summer.

They say Martínez is being ‘watched by Sheffield United, an English team who have just been promoted to the Premier League’. 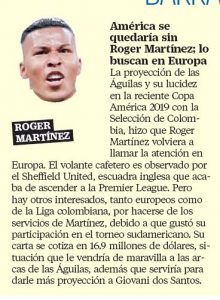 But it seems that’s all they have to say about the Blades for now, adding that other European and Colombian sides are also keen on signing Martínez.

El Universal says the player’s price should be US$16.9m (€15m), a fee which would be ‘marvellous’ for America to get, and one which doesn’t seem out of Sheffield United’s reach.

Martinez scored 14 goals in 41 games for the club last season.