The Portuguese press continues to have a lot of expectation for the arrival of Thiago Almada to Sporting, with a little help from Manchester City.

Two newspapers have article about him today. One is O Jogo, who bring two pages about his life-story in Buenos Aires, living in the same tough neighbourhood as Carlos Tevez.

The other story comes from Record, and is more about what has been happening in the past few days. They say the player has been under pressure to sign a new deal at Velez Sarsfield.

Club officials continue to say that the contract is ready for him to sign it. They want to increase his release clause from €16m to €25m, and given the fact that Velez helped him with things like a house in his early days, Almada has a kind of gratitude debt with the club. 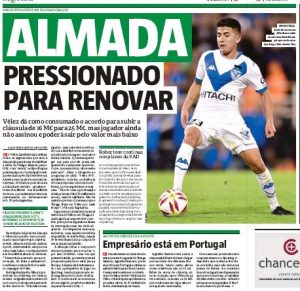 Sporting takes quotes from Rodrigo Rapisarda, son of Velez’s president, speaking to Radio Velez 670 at the weekend: “There was an approach from Manchester City, but it was rejected. There isn’t more than that. We want Thiago to stay at Velez for longer.”

Now it looks like this new contract will be crucial for things to go through or not. O Jogo says Almada’s agent is in Portugal, but actually to take care of other business.

It’s interesting how the Portuguese press has been giving big coverage to this transfer, even though the player is supposed to be bought by Manchester City and spend only a year at Sporting. Perhaps they’re hopeful he can stay for longer.