Earlier this week we brought you an update on the future of Manchester City youngster Manu Garcia.

The young midfielder was seemingly on his way to Sporting Gijon after City had made it clear he had no place in Pep Guardiola’s squad.

Garcia was set to be part of the group travelling to China but El Comercio reported he wouldn’t be going and instead wanted to sort out his future.

AS update on that today and say the issue has now been sorted. Garcia will be returning to Sporting and a loan deal has already been agreed.

According to the newspaper, the 21-year-old has signed a new two-year deal at the Etihad and will now spend the season in La Liga 2, which will be his fourth loan move to date. 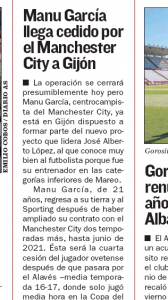 That’s a move that seemingly suits all parties. Manchester City get to keep a young player and don’t have to worry about his contract until next summer.

Garcia, meanwhile, gets the move and playing time he wanted while Sporting improve their squad. It’s a win on all fronts and a quick end to one of City’s lesser transfer dealings this summer.

AS think the deal will happen quickly, ‘presumably today’, and add Garcia has travelled for the completion.