Il Mattino in Italy aren’t ready to let go of the idea that Rafa Benitez could make an unexpected return to Napoli if he were to leave Newcastle in the summer.

We’ve already covered their previous report on the matter, which stated the Spanish manager was ‘very perplexed’ at receiving a phone call from Aurelio de Laurentiis, but not once did he say ‘yes’ or ‘no’ when asked if he would be interested in another spell in the south of Italy.

Il Mattino on Tuesday report that, since then, contact between the two parties has been ‘continuous’, with the Napoli president telling the Newcastle manager that were he to decide to leave England, he would welcome him back at the club ‘with open arms’.

However, Benitez has yet to make a decision on his future, and, before doing so, would like to see what he can get around the Premier League first. 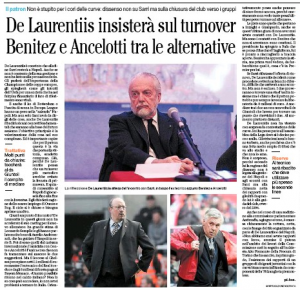 For doing so, Il Mattino describe the St James’ Park resident as a ‘crafty fellow’, most likely thinking that if he gets offers from England, he’d be able to use them as leverage against De Laurentiis, or use Napoli’s interest as a bargaining tool to get a better deal in the Premier League.

Since this isn’t going away, there certainly could be something behind it, as there’s never this much smoke without at least some semblance of embers.

Whether Benitez actually wants to return to Napoli, that’s never actually touched upon.