Ahead of Villarreal’s trip to Old Trafford in the Champions League, we covered claims from the Netherlands about Liverpool interest in Arnaut Danjuma.

The 24-year-old swapped Bournemouth for Villarreal in the summer, and it was explained Jurgen Klopp’s side saw him as a potential long term successor to Sadio Mane.

Liverpool would be looking ahead to future summer transfer windows, and watching Danjuma regularly to check he’s progressing well in Spain.

That’s certainly been the case, with the attacker putting in a good performance for Villarreal against Manchester United, despite the Spanish side losing.

He did similar at the weekend as Unai Emery’s men beat Real Betis 2-0. AS say Danjuma has been a ‘sensation’ during the start to the season, and the real ‘MVP’ for Villarreal. 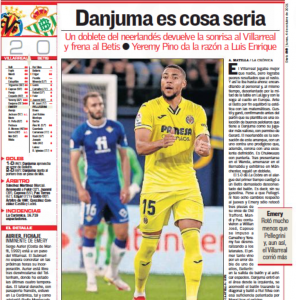 No player rated more highly than he for the victory over Betis, and he scored both his side’s goals.

This Liverpool transfer plan is looking better by the match.