Saul Niguez wanted a move to the Premier League for much of the summer transfer window, and it appeared like he was being offered to multiple sides.

Having grown frustrated at being a bit part player under Diego Simeone at Atletico Madrid, the Spanish midfielder believed a move to England could be the best decision for his career.

So far, that hasn’t worked out very well, and ahead of Chelsea’s match against Juventus in the Champions League, there were already rumours in Spain about the move not working out very well.

Monday’s edition of Mundo Deportivo reports Thomas Tuchel ‘promised’ Saul a place in Chelsea’s midfield, yet despite Jorginho and N’Golo Kante being absent at the weekend, he didn’t start the match. 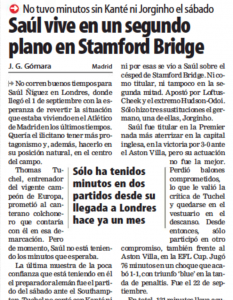 Not only that, Tuchel didn’t even bring Saul on as a substitute, and Mundo say he’s quickly become just a ‘background’ player at the Blues.

The 26-year-old is ‘having a hard time’ in London, and may already be realising the grass isn’t always greener.