Earlier this week, Le10 Sport in France came out with a rather interesting story that Manchester United, who aren’t exactly hating life under Ole Gunnar Solskjaer, were keeping an eye on Thomas Tuchel.

Despite winning Ligue 1 comfortably last season, the team’s failures in the Champions League (to the Old Trafford club, rather ironically) are still being felt, and without any sort of improvement this year in the European competition, it could be the end of the run for the German.

Leonardo’s return as director of football certainly didn’t help the rumours surrounding Tuchel’s future, with reports Max Allegri, now without a job, was being looked at, but the backing he received this summer on the transfer market helped ease the worries.

L’Equipe on Friday echo all these thoughts, adding the former Borussia Dortmund manager doesn’t consider his adventure in Paris over and knows his status on the managerial scene hasn’t been impacted by his work in France’s capital. 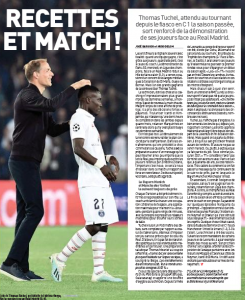 The newspaper then go on to confirm Le10 Sport’s exclusive, claiming ‘three teams around Europe have let him know they continue to follow him closely, among which are Bayern Munich and Manchester United’.

That doesn’t necessarily mean Niko Kovac’s or Solskjaer’s jobs are at an immediate risk, but the fact both the European giants are keeping an eye on things in Paris suggests they want to be ready in case things turn sour with their current managers.