Thursday night saw Celtic open their Europa League campaign, and while the fixture might not have looked arduous on paper, Rennes are a rather tricky team to play.

Paris Saint-Germain have found that out the hard way, losing to them in their previous two encounters (that mattered, we won’t count the Trophée des Champions).

Celtic, however, walked away with a point, and while it might not have been the prettiest display, it was an efficient one.

That was shown by the fact L’Equipe chose centre-back Christopher Jullien as the Scottish side’s top performer (giving him a 6/10), explaining that despite missing a couple of passes, the former Toulouse defender showed ‘a lot of control, whether it be in his many duels against M’Baye Niang, or when he stopped Flavien Tait in his box with a very clean tackle’.

They finish by saying the 26-year-old was ‘by far the most reassuring defender on his team’. 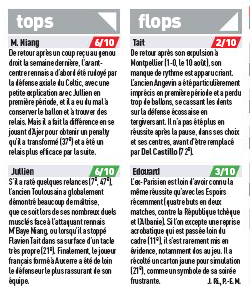 Further up the pitch, the story was very different, as Odsonne Édouard, normally very reliable to create or put the ball in the back of the net, struggled to have any impact on the game.

Far from his usual self, the young forward ‘rarely put himself in evidence, especially with his back to goal’, and topped off his ‘frustrating evening’ with a yellow card in the 21st minute for diving.

On the other side, M’Baye Niang was given the top grade for Rennes with a 6/10, while Flavien Tait, who had to leave the pitch on a stretcher, was given a miserable 2/10, making him the game’s flop.