Fulham are one of the English clubs credited with an interest in Barcelona’s Jean-Clair Todibo.

Mundo Deportivo reported on Friday the two clubs have reached an agreement for the centre-back’s transfer, but the deal wasn’t closed because he isn’t in favour of joining the Cottagers.

The La Liga side need to trim their squad before the window closes on Monday, and Saturday’s edition of Sport explains Todibo, Samuel Umitti and Rafinha are the three players expected to leave in the coming days.

With regards to Todibo, the newspaper states Fulham would be willing to pay €18m to acquire his services.

Online, Sport now backs Mundo’s claims from Friday and states the two clubs have ‘reached an agreement in principle’ for €18m plus bonuses.

Jorge Mendes is acting as an intermediary, and the super-agent, along with Todibo’s representatives, are working on the deal. 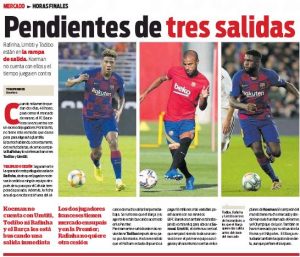 It’s claimed there’s been a new development and Todibo has now changed his mind.

As per the report, the Frenchman is studying offers from Fulham and also one from Everton, with the latter being a questionable claim.

Fulham hope to ‘close the operation’ to sign Todibo. Should they fail, they will immediately shift their focus to Sampdoria’s Omar Colley.